5 Stars Based on 10 reviews

Drizzle salmon with olive, rub spices into the fillet and season with salt and pepper.

Heat olive oil in a large cast-iron sauté pan. Add the salmon fillet and fry on both sides until crisp and golden, around 4 minutes. Remove from heat and carefully break the salmon up into small chunks, discard of skin.

To barbecue the salmon, heat a large barbecue grill plate until medium-hot. Fry on both sides until crisp and golden. Remove from heat and carefully break the salmon up into small chunks, discard of skin.

Cube mango and avocado and place in a medium-sized bowl. Add the diced red onion, roughly chopped coriander and juice of the lime. Gently mix to combine.

In a non-stick fry pan or on the barbecue over a high heat, fry tortillas until colouring on both sides. Place in a tea towel to keep warm.

Serve tacos topped with shredded red cabbage, mango salsa and spicy salmon chunks. Finish with a few coriander leaves, a squeeze of lime and a dollop of chipotle sour cream. 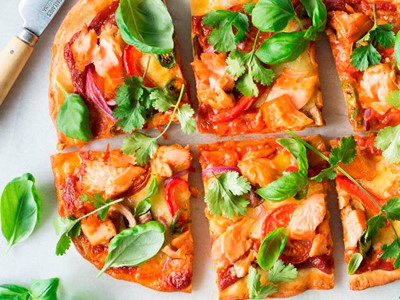 Stay up to date with all things Regal

Sign up for our newsletter for delicious recipes, new products and Regal news